With Amanda at the Kamloops Airport (YKA) ready to leave on our adventure!

Here it is. My 50 Crazy Things in My 50th year has begun. I, very much a non-Disney Princess, ran the Disney Princess Half Marathon at Disneyworld on February 22, 2014 – just two days before my 49th birthday. When I thought of it, it was the craziest thing I could think of doing. I was in a bit of a funk, annoyed that I was going to turn 50 next year and feeling like I’m not what I imagined 50 to look or feel like. I feel like I’m in my 30’s, in the prime of my life, like I have everything ahead of me. I needed to get out of the rut I was building around myself, the habits that were easy, making my life smaller

and smaller instead of growing bigger. When I told one of my library patrons, who is in her sixties, what I was doing she said I should do 50 Crazy Things in My 50th year to celebrate and hit that number head on instead of cowering from it. So, here I am. I am doing 50 crazy things that will help me get over fears and self-imposed limitations that keep me from living life 100 per cent. Some seem really easy and some are really hard, but all of them are designed to get me back in the game.

It all started when…

Amanda surprised me be decorating our window with images from the insane Pinterest board we used to plan the trip. I loved it!

All of this thinking started in the spring of 2014. I was drinking wine and surfing Pinterest, never a good combo, and I started coming across running costumes for races. I started randomly sending the Disney ones to my friend, Amanda, who loves Disney and had never run a step in her adult life. Long story short, she finally started talking to me again and then said, sure, let’s go for it.

We registered, a bit of a miracle there as it sold out in six hours, and then we started making plans that culminated in not only the run, but 5 days away from home, 3 days in Walt Disney World and one in Universal Orlando. I realized I hadn’t been to the United States in probably twenty years, and I hadn’t even been on a plan in six years. This trip was long overdue for me, even if it was to just shake things up a bit.

We had a great time staying at Disney’s Art of Animation Resort, in an Ariel Room as a tribute to the fact that I was running as Ariel from the Little Mermaid. Amanda was running as Rapunzel.

Run wise – it sucked! I’ve felt much better during other half marathons – the time change, humidity, and crowds did me in, and the hip and foot injuries I had didn’t help. Aside from that, though, this was an extraordinary experience for me.

Ariel and Rapunzel coming out of Cinderella’s Castle – who gets to do that????

Although I used to travel when I was younger, I haven’t done anything different for a really long time. I hadn’t been on an airplane in about six years, and I hadn’t been to the states in about twenty years. This was the furthest east (in North America) and the furthest south I’ve ever been. I can’t remember the last time I did something that was just for me. The biggest thing was I said I wanted to do something… and I did it! This is me reclaiming my adventuresome spirit. I know my plans have inspired other people to try new things and step out of their comfort zones.

Huge thanks to Amanda Cowell for taking up the challenge, running her first half marathon, and planning the Disney part of our trip perfectly. I know it was an adventure for her too.

Check out our gallery for more pictures from our Disney adventure. 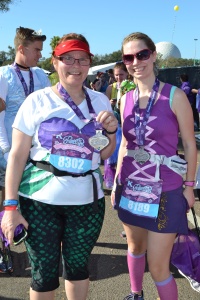 Oh yeah, we rocked it!