The suspension bridge leading into the Whitehorn campsite

A sequence of bridges leading to Berg Lake

important to me and I’m very proud of myself for doing it. While the whole Berg Lake Trail was a challenge for me (blog post to come on that), the suspension bridge leading into the Whitehorn campsite was on my radar as a potential challenge I would need to conquer. My thing is, I like the structures beneath my feet to be firm. I don’t like movement and I don’t like the feeling of having to trust whether or not someone did their job right or that the structure I’m walking on may collapse at any minute. Bridges in general are a bit unnatural to me. I guess I watch too many Indiana Jones-type

movies – you see a skinny bridge, or a suspension bridge, and you know what comes next. It will collapse, the ends will be cut, or burned, and the whole structure will swing with some poor unsuspecting soul on it. Even large bridges, like the Lions Gate Bridge or the Port Mann Bridge in Vancouver, make me a bit nervous. The sounds change when you’re on a bridge. Things become more focused. I notice I hold my breath until I safely reach the end. It’s not a gripping fear that stops me from going places but I’m definitely aware of all bridges and the fact that they are suspended above great cavernous spaces that I have no control over. 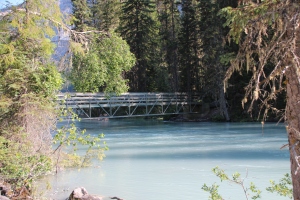 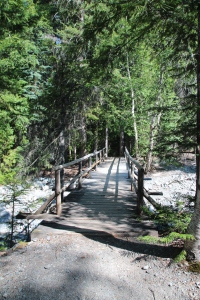 The Berg Lake trail has a number of bridges that made me nervous. Some were only two pieces of 2X6 stretched over a stream, others were wider. Some had two railings and some only one. All of them made me nervous. The fact that I was carrying a heavy pack didn’t make things easier since my raised centre of gravity made me feel less stable than normal, and I don’t feel stable at the best of times. My ankles wobble on narrow surfaces. I don’t have sure footing, and my heart is pounding so hard I need to rest when I get to the other side. Adding a suspension bridge into the mix made it all the more challenging.

Why is this crazy?

I’ve said before that heights aren’t a problem, and they’re not. But there’s something about bridges that make me very cautious. Where people I know bound effortlessly over them, I pick my way slowly, cautiously, shaking the whole way. Bridges are above nothing. The expanse below is scary and I find them slightly unnatural. Suspension bridges are the worst. Suspension bridges move. They don’t seem to be attached to anything solid. They seem fragile and free thinking – something I don’t like in structures that are supposed to support me. It’s hard to explain why this is crazy. It didn’t make me want to vomit or pass out, but crossing a suspension bridge is definitely not something I have actively sought out… until this year. There will be another one in the fall if all goes well. This is a starter.

As suspension bridges go, this one is probably pretty tame. The sides are chain link fencing, which feels pretty solid. I don’t think the wood pieces you step on are in much danger of falling off and I don’t think the cables holding the bridge are likely to snap…. But… it could happen! 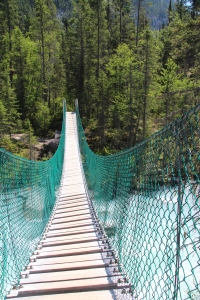 walk on) isn’t even close to level made me very nervous. I think it has about a twenty degree lean which made me question the engineering skills of the person who designed and built it – and that made me question the rest of the structure. We weren’t really high above the water, but the river was moving in rapids and it was hard not to look at it and imagine myself tumbling down into the white foam.

My pack felt heavier. My legs were tired, and didn’t seem to want to bend. Not one part of this was pleasant or effortless. I had a brief thought about taking a picture from the middle of the bridge but my hands were shaking so much I was pretty sure I’d drop the camera so I decided against it. Oddly enough, and this surprised me, the worst part of the bridge was not the part that was suspended, it was the ramps leading up and down. They were narrow, wobbly and I felt I was going to lose my balance on them. Crossing wasn’t as bad as I imagined it would be but I did breathe a sigh of relief when I got to the end. I nearly crawled down the ramp on the other side, though, which was a bit embarrassing since there were people waiting to get on the bridge and only one person was allowed on at a time. I had to do it twice and it wasn’t really any easier the second time, but I had to go across to get home! 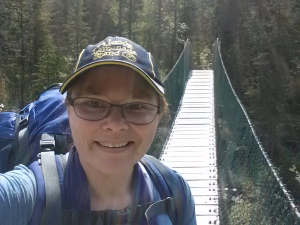 Absolutely (immersion therapy – desensitizing myself to the sensations). I think I’ll be doing another, longer, suspension bridge in October. Pretty sure I won’t have a 40lb pack on my back so that should make the balance a tiny bit easier! Maybe next time I drive into Vancouver I won’t hold my breath going across the Port Mann Bridge… maybe!