When we were kids my brother and I spent all of our Christmases and summers at our family farm near Perdue, Saskatchewan. That side of my family is small and extremely close. My cousins are more like brothers and sisters to us.

One of the things I remember doing in my early teens was skidooing. The six of us (cousin 7 was pretty little at the time) would go out to the field next to my aunt and uncle’s house at night with a skidoo and an inner tube from a tractor. On a cloudy night we would only see the lights from the house. Everything else was pitch black. The field had a stand of trees at the far end and a slough with tall reeds and grasses in the middle. It was always incredibly cold (it was Saskatchewan!).

Once we got out there, inevitably, a ‘game’ of crack the whip would ensue. The idea behind this activity was simple. One person drove the skidoo. Another rode behind him / her, and four others would ride the tube. It was a big tube. Unlike the tubes people use on lakes now, these tubes didn’t have handles or anything to hold on to. You had to squeeze your legs and arms around it and hope for the best. Nobody ever lasted long, but we kept trying thinking, “This time I know I can hold on!”
For those of you who don’t know what Crack the Whip is, here is the Wikipedia definition:

Crack the Whip is a simple outdoor children’s game that involves physical coordination, and is usually played in small groups, either on grass or ice. One player, chosen as the “head” of the whip, runs (or skates) around in random directions, with subsequent players holding on to the hand of the previous player. The entire “tail” of the whip moves in those directions, but with much more force toward the end of the tail. The longer the tail, the more the forces act on the last player, and the tighter they have to hold on.

When we played Crack the Whip the driver of the skidoo would drive around in large circles, building up momentum, as the tube and its passengers swung around faster and faster. In the early days of the game, when we were just figuring out how horrible it could really be. It was enough that the driver would go over bumps, or go fast. If people fell off, the driver would need to stop and turn off the engine to hear the screams because seeing the stranded pre-teens and teens was impossible. Once you heard the screams you could head off in a direction toward them. For those who fell off and were waiting to be rescued, the sound of coyotes and other creatures of the dark off in the distance was unsettling, to put it politely. 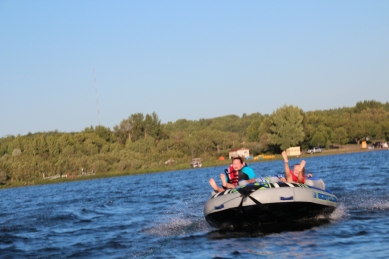 Crack the Whip… how I missed you… not!

In the advanced form of the game, the driver of the skidoo would drive around and around and then direct the circles in such a way that the tube flew up over a jump made from reeds from the slough that were laying down because we had driven over them with the tube so many times. They formed a sort of ramp. Ah the memories! Now, when we flew off the tube, because it was absolutely impossible to hold on, we were flying through the air, in pitch blackness, waiting for the inevitable hard landing in a snowbank. I actually clearly remember a moment where I was flying through the air and I was unsure of what part of my body was closest to the ground, and what position I would land in.

Isn’t it amazing we all survived to adulthood and the only injury I remember was my cousin Lisa getting frostbite around her ankle because she had grown since the previous winter and she, of the long legged variety, had exposed skin from where the legs of her skidoo suit were too short.

Now, fast forward approximately 34.5 years. My last night at the lake this summer in July was supposed to be uneventful until my cousin, Loral, walked by me and said, “Come on, you’re going to be spontaneous and it will be crazy. You and Ben are going tubing.” Ben is her son, who is about 8, and fearless.

It’s important to note here that Loral was frequently the driver of the skidoo. Are you seeing the picture here?

So, an unplanned crazy thing happened and apparently, I survived.

Ben and I got our lifejackets on and got onto the tube. This tube had good sturdy handles and the grip I had on them reminded me of being on the Tower of Terror at Disneyworld with Amanda. I had a death grip on those handles.

Loral towed us out into the middle of Jackfish Lake, and proceeded to try and kill me…. Ah, Crack the Whip, how I missed you! My other cousin Krista took pictures. None are great because Loral was driving like a maniac, but they prove I was there.

It felt like it lasted for days but it might have been an hour in total. I was screaming the entire time, which Ben thought was hilarious. I seriously thought if I let go of that handle I was going to be flung half way to Alberta. I was screaming to slow down, my butt wasn’t even touching the tube, and Ben, holding on with one hand, is telling her to speed up. I love my family… freaks! The only way it would have been scarier is if it was at night…. on ice!

The next day I had to drive home and my arms were screaming at me the whole 14 hours… something about, “What the hell were you thinking?”

Why was this crazy?
I’m not a very spontaneous person. I like to plan things and know what to expect. All I had to go on was that Loral was driving and that memory from my teens of flying through the air and not knowing if I was going to land on my head or my butt.

Would I do it again?
Probably, I think Ben is counting on it. He took too much pleasure in my screams. He is definitely his mother’s son. 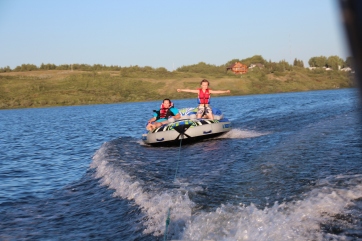 Ben… he is his mother’s son.